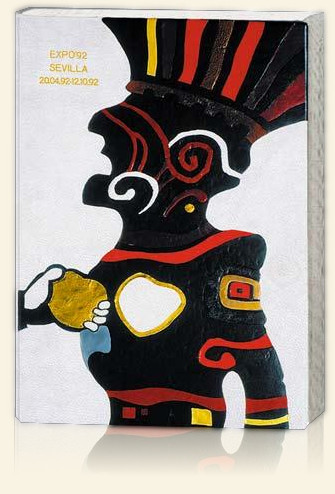 Can art be dangerous? Is it possible to be afraid of it and to censor it? The answer turns out to be yes.

Report of the Polish conference on the occasion of world exposition in Seville EXPO’92 was removed from the Spanish television. TV journalist at the conference on 18th of February 1992 clearly stated that they would be problems with the emission of reportage, because the poster of John Lenica „with torn out heart and screaming mouth in a grimace” wouldn’t be liked by the Spanish as a comment to the role of Columbus. The opposition of Spanish journalists triggered a greater support of Lenica’s poster by the Latinos.The main theme of the EXPO’92 was „Meetings of the Two Worlds – Age of Discovery” and the circular 500-year anniversary of the discovery of America (1492-1992).

The Spanish were very proud of that. After all, they gave America  the world and carried the torch of education there and promulgated its civilization. However John Lenica rapacious poster design and the Polish Pavilion guest books influenced the idyllic and culture-forming nature of the discovery of America. This design shows the Discovery of America as a selfish conquest that involved brutal massacres and robberies. This vision of the artist showing the historical truth from a different perspective proved to be prophetic.
In 2006, 14 years after EXPO’92 in Seville some information was given about the discovery of a document by the archivist Isabel Aguirre describing Christopher Columbus and his role in the discovery of America. It explains why the admiral was deprived of his dignity and power of the position of viceroy and governor of India.
The memory book of EXPO’92 in accordance with Lanica’s poster proved the negative censor outburst wrong. Previously John Lenica had doubts about his poster being used on the cover of a book without colour. In his letter to the  Commissioner-General of EXPO’92 Wladyslaw Serwatowski he mentioned a couple: The proprietors of Artistic Publishing House in Koszalin who liked his poster and wanted it printed on the cover of a book of the Polish Pavilion, but he wasn’t enthusiastic about it. He could not imagine his poster pressed on the leather cover of the book without colour. ”The poster is the poster and that’s all” he said. He asked the Commissioner General who had a copyright of the poster to contact him in case there were similar suggestions. He said there had been very positive reactions about his poster.
Wladyslaw Serwatowski mentioned in Gazeta Wyborcza (20th of November 2001): Lenica’s view on the issue about his poster being printed on leather without colour changed „The Book with torn out heart” was released. The book enjoyed attention and intrigue, especially by the Spanish and Latinos. The book weighed 16 kg. The press no longer had views similar to the report of the Spanish television of the 18th of February 1992 EXPO conference. One of the journalists wrote about the work  „just do not say you don’t like the cover, because then you will be taken as an idiot.”
John Lenica and tens of thousands of visitors of the Polish Pavilion at the EXPO 92 in Seville also liked the cover which enjoyed great success. There was no space left to sign so the book was completely filled with signatures even at the edges and on the sides of the book. It was an exceptional document of that global event. It was one of three guest books made by the Artistic Publishing House Kurtiak and Ley at the EXPO 92 in Seville.